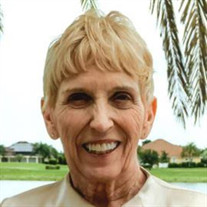 Penelope “Penny” Johnson Carroll (Rees), 79, of The Villages, FL, passed away at The Villages Hospital on Sunday, May 31st, 202. Penny married her college sweetheart, Ray Johnson, on September 1st, 1962. Together they raised a family and celebrated over 50 years of marriage. He preceded her in death on January 23rd, 2013. Love found Penny again, and she married Alan Carroll on August 6th, 2016. Their affection for one another and enjoyment of each other’s company was deeply admirable. Born on April 11th, 1941, in Norwalk, Ohio, Penny was the daughter of Leon and Edna (Peckham) Rees. Upon graduation for Norwalk High School, she attended Kent State University and received a Bachelor of Science in Speech & Hearing for Ohio University. She later earned a Masters of Science in Education from Western Michigan University. Penny devoted over 35 years to teaching children with special needs, mostly within the Hillsdale County Intermediate School District, in Hillsdale, Michigan. Karen (David) Yost, Cher (Johnathan) Stout and Ray Johnson were blessed to have a mother, who took a keen interest in all of their endeavors. Penny was especially delighted by her five grandchildren Kaitlyn, and Johnathan Yost and Wade, Whitman, and Wyatt Stout. Step-children Mickey Roderick, Terry Schauber, and David Carroll as well as their children and grandchildren, became happy additions to her family. Penny was a longtime member of the Hillsdale first Presbyterian Church and a founding member of the Hillsdale Women’s Investment club, holding leadership positions in each. After retiring to sunny The Village, FL, she became an avid golfer, a member of the garden club, and joined New Covenant United Methodist Church, where she volunteered with the Stephen Ministry, funeral reception services, and the outreach ministry at the Wildwood Food Pantry. She had a passion for genealogy and became the family archivist. She enjoyed a lifetime of antiquing, gardening and baking and was known for her antique clock collection, rose gardens, and homemade confections. Penny was also adventurous at heart, seizing opportunities to visit now of the United States, Great Britain, Europe, the Caribbean, Central America, New Zealand, and Australia. In 2014, she experienced the trip of a lifetime, travelling to the Holy Land. She especially enjoyed visiting with and hosting friends and family from around the country. She is survived by her husband Alan Carroll, sister Lenore Kotys (Rees), sister-in-law Sarah Ackerman (Johnson), children, grandchildren, step-children, step-grandchildren, and many nieces and nephews. A celebration of life service for Penny will take place 11:00 AM, Thursday, July 16, 2020, at New Covenant United Methodist Church, in The Villages, FL. Arrangements are entrusted to Banks-Page-Theus Funeral Home in Wildwood, FL. In Lieu of flowers, memorial contributions can be made in her name to “New Covenant United Methodist Church”, to support its ministry at the Wildwood Food Pantry. Please designate that it be used for the food pantry ministry and mail to: New Covenant United Methodist Church 3470 Woodridge Dr., The Villages, FL 32162

Penelope &#8220;Penny&#8221; Johnson Carroll (Rees), 79, of The Villages, FL, passed away at The Villages Hospital on Sunday, May 31st, 202. Penny married her college sweetheart, Ray Johnson, on September 1st, 1962. Together they raised a family... View Obituary & Service Information

The family of Penelope "Penny" Johnson Carroll created this Life Tributes page to make it easy to share your memories.

Send flowers to the Carroll family.