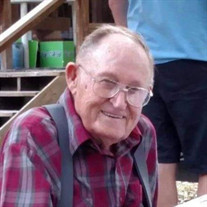 Morefield James Scott, 95, Bushnell, Florida went to be with the Lord on August 7, 2020 at his residence under the loving care of his family, caregiver Gissele Roldan, and Cornerstone Hospice. Mr. Scott was born on June 7, 1925 to his parents Johnston Scott and Susie (Huett) Scott in Rutland, Florida about 12 miles from where he resided in Bushnell. He was a former Agriculture Inspector for the State of Florida and the U.S. Department of Agriculture. He and his loving wife Hazel Edith (Merritt) Scott moved to Bushnell, Florida, in 1987 from Vero Beach, Florida. Morefield was very active in local Veterans service organizations. He organized and commanded the Sumter County Honor Guard, was the former Commander of Amvets Post #793 in Webster, Florida, and a member of The American Legion Post #18 in Wildwood, Florida. Morefield had volunteered nearly 1000 hours serving at the VA Hospital in Gainesville, Florida, as an escort as well as serving coffee and donuts. He graduated from Wildwood High School in 1943, joined the U.S. Navy in February 1943 and was able to join early and still receive his high school diploma. He served in Jacksonville at Cecil Field Airbase, Naval Air Station Banana River (now Patrick Air Force Base), Cape Canaveral, Florida. In 1946 he discharged from the Navy, started dating Edith, and they were married in September 1947. He attended the University of Florida and graduated in 1950 with his Bachelors of Science in Agriculture. In 1953 he joined the Federal and State Inspection Service and worked until he retired in 1971. Morefield continued working in the agriculture industry by managing a packing house, officially retired in 1988 and ran Bugtussle Farm Stand with Edith until her passing in 2003, and continued to run the stand for many more years . He is survived by his two sons: Charles Seth Scott of Tallahassee, FL, and William Ray Scott of Havana, FL; two brothers: David Scott (Betty Jo) of Webster, FL, and Johnston Scott (Connie) of Apopka, FL; seven grandchildren; twelve great-grandchildren and one great-great-grandson. Graveside funeral services will be held on Friday, August 14, 2020 at 1:00PM at Florida National Cemetery, Bushnell, Florida where he will be laid to rest with his beloved wife Edith. A visitation will be held on the day of service at Banks, Page-Theus Funeral Home, Wildwood from 11:00AM till 12:00PM (Noon) and then will be traveling to Florida National Cemetery. In lieu of flowers the family has requested donations to be made to any Veterans service organization in Mr. Scott’s loving memory. Online condolences may be shared by visiting www.bankspagetheus.com. Arrangements are entrusted to Banks/Page-Theus Funerals and Cremations.

Morefield James Scott, 95, Bushnell, Florida went to be with the Lord on August 7, 2020 at his residence under the loving care of his family, caregiver Gissele Roldan, and Cornerstone Hospice. Mr. Scott was born on June 7, 1925 to his parents... View Obituary & Service Information

The family of Morefield James Scott created this Life Tributes page to make it easy to share your memories.

Morefield James Scott, 95, Bushnell, Florida went to be with...

Send flowers to the Scott family.