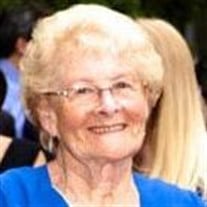 Margit Egeland née Jerstad May 7, 1925 – August 11, 2019 Margit (Jerstad) Egeland passed away peacefully August 11, 2019, in The Villages, Florida. She was 94. Margit was born in Kvinesdal, Norway, on May 7, 1925. She married Einar Egeland in 1946 after enduring the hardships of the occupation of World War II. In 1953, Margit and daughter Anne Lise joined Einar in the United States to start a new life. They arrived in Bay Ridge, Brooklyn, New York, where son Roy was born a year later. The family assimilated quickly with the help of many friends in this quaint neighborhood known to all as Little Norway. In 1975, Margit and Einar bought a house and moved to Staten Island, where she lived for almost 40 years; Einar passed away in 1990. Margit was an active member of the Sons of Norway. She loved to attend the regular gatherings and events where members could reminisce and celebrate their heritage. In fact, in later years, Margit would hop on the local Staten Island bus and take the long ride to Brooklyn so as not to miss Sons of Norway meetings and events. In 2014, Margit moved to The Villages to be closer to her daughter, son, and daughter-in-law, Joan. Known to many by the endearing name Mormor, Margit loved to knit, and her Mormor socks and mittens were a treasured gift to receive on special occasions. She enjoyed cooking and rarely missed an opportunity to prepare the much-loved weekly roast for Sunday “middag” (dinner). She also loved to bake, and her “krumkake” was second to none. She was a loving wife, mother, and grandmother and provided wisdom and strength throughout her wonderful, rich life. Margit has one surviving sister, Synnøve Mabel Jerstad Fineide; her brother, Peder Arnold Jerstad passed away in 1989. Margit is survived by daughter Anne Lise Ocejo of The Villages, Florida; son Roy Egeland (Joan) of The Villages; grandchildren Richard Ocejo (Chantal Martineau) of New York, Elizabeth Slocum (Matthew) of Pennsylvania, and Karen Egeland (Tristan Cummings) of Texas; and great-grandchildren Sidney, Rita, Greta, and Nola. In lieu of flowers contributions may be made to: Cornerstone Hospice: https://web.cshospice.org/foundation/giving/

The family of Margit Egeland created this Life Tributes page to make it easy to share your memories.