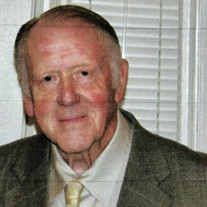 JOHN STEPHEN FAHY March 8, 1932 – March 9, 2020 Our beloved, John Stephen Fahy, went to be with the Lord on March 9th, 2020, just two hours after his 88th birthday. John was born in Leeds, England, March 8th, 1932. In his youth he loved playing rugby, soccer and later in life he enjoyed the game of golf. He was a lover of poetry, reading and music. John was a romantic! John studied chemistry, physics and technology. He graduated with honors from St. John University in York, United Kingdom. He traveled the world and resided in Paris, Rome and the Netherlands. John was employed by scientific companies such as Philips and FEI. He was part of the team in the development, demonstration and technology of the Transmission Electron Microscope. John moved to the States in the mid- seventies. Married Lili in 1994. Through his marriage to Lili John was stepfather to Therese Ritchie, Gigi, Guy and Christian Rinesh. John leaves behind two children. A daughter, Samantha who resides in New York City and a son, Michael, who resides in Ringwood, NJ with his wife, Lisa and two children Caitlin and Brianna. John was deeply honored and loved by his children and stepchildren. His six grandchildren brought him much joy as did his three great grandchildren. John was a quiet, deep thinking, kind, God loving gentleman and will be missed deeply. On March 24th at 12:15pm, there will be a Funeral Mass of Resurrection at St. Vincent de Paul Catholic Church. 5323 E. CR 462 Wildwood, Florida 34785. Internment Ceremony will follow at Hillcrest Memorial Gardens, 1901 County Road 25A, Leesburg, Florida 34748. All are invited. In lieu of flowers, the family requests donations to Cornerstone Hospice, 601 Mariposa Way, The Villages, Fl. 32162 or to his daughter's charity link, the American Foundation for Suicide Prevention at https://www.theovernight.org/participant/Samantha-Fahy-2020

The family of John Stephen Fahy created this Life Tributes page to make it easy to share your memories.

Send flowers to the Fahy family.