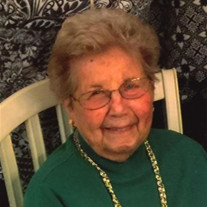 On June 20, 2019 Jean Barnes passed from this earth. Jean Dale (Davis) Barnes was born June 26, 1922 to Jay G. and Ada Blanche Davis in St. Joseph, Missouri. She graduated from Lafayette High School in St. Joseph in 1940. On March 8, 1942 she married Clarence E. Barnes, Jr. They moved to St. Louis, Missouri until Clarence entered the military in 1943. She then moved back to St. Joseph where she and her young daughter resided until the end of WW II. After the war, she and her family moved to Kansas City, Missouri so her husband could obtain his degree from The Kansas City Art Institute. She was a very busy young mother during those years as she had two more children, another daughter and son. In 1949, Jean and her family moved to Wichita, Kansas, where they lived for the next 18 years. Jean was a devoted wife and mother, always willing to help her children in all their endeavors. She was also active in her community serving as PTA president and on numerous school and church committees. She was an active member of Beta Sigma Phi. In 1968, Jean and Clarence moved to Rockledge, Florida, as part of the Space Program. They fell in love with Florida and were active in the Audubon Society and enjoyed exploring Florida’s many state parks and took numerous kayak trips. They truly enjoyed traveling and attended numerous Road Scholar (Elderhostel) programs throughout the United States. While in Rockledge, Jean was active in the Florida Homemakers program and the University of Florida named her the Florida Homemaker of the Year. In 1994, they moved to Ft. Myers, Florida where they enjoyed living in an active older adult condo community, playing golf, and socializing with their neighbors. They were long time members of the Ft. Myers Unitarian Universalist Church. In 2013, Jean moved to Hawthorne Village in Ocala, Florida to be near her daughter after Clarence’s death. Jean was preceded in death by her parents and brothers William and Milton. Jean is survived by her three children, Judy (Barnes) Spinner (Harold); Karen (Barnes) McGinnis (Dan) and David Barnes; four grandchildren, Kelli Siebel, Jennifer Smith, Matthew McGinnis and Marc McGinnis and ten great-grandchildren. Services will be held in ft. Meyers at a later date.

The family of Jean D. Barnes created this Life Tributes page to make it easy to share your memories.

Send flowers to the Barnes family.