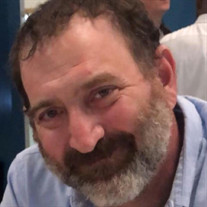 Jay G. Jinks III, age 49 of Oxford, formerly of Hampton Bays, NY, passed away on Sunday, October 11, 2020. Jay was born in Fayetteville, NC on August 15, 1971 the son of Jay G. Jinks Jr and Antoinette (Criscito) Poortenga. He graduated from Westhampton Beach High School. SFC Jinks joined the U.S. Army in 1993, completing Basic Training and Infantry School. He passed the Special Forces Qualification Course in 1998 to earn the coveted Green Beret. SFC Jinks found himself assigned to the 10th Special Forces Group (Airborne) and joined Special Forces Operational Detachment - Alpha 085, a combat dive team. He completed the Special Forces Combat Diver Qualification Course and U.S. Army Ranger School making him a rare commodity even within the SOF community. SFC Jinks continued to train and deploy with the 10th SFG(A) until 2002. He later joined Charlie Company, 1st Battalion, 20th SFG(A) in the Massachusetts Army National Guard in continued service to his country. Jay had many passions in life such as his gym, CrossFit Hamptons in New York, fighting for his country and helping others find their own strengths. However, his greatest joy in life was his son Christian. Jay always loved to poke the bear whether it was sleeping or awake. He was never one to back down from a cause he believed in, Jay was a true warrior. His last battle, cancer, was one he fought the same way he would any other fight with bravery, courage and defying the odds. Jay is survived by his son Christian Jinks of Miami, Also his parents Jay G (Carol) Jinks Jr of New York, Anita (Terry) Poortenga of Oxford, sisters & brothers; Justine (Sean) Williams of Wildwood, Michelle (Andrew) Watkins of Michigan, Terry (Olga) Poortenga of New York, Michael (Erica) Poortenga of Summerfield. He was loved and adored by his nieces and nephews Gabe(Kristin), Jeremiah, Samuel, Noah(Tayler), Hannah, Emily, Mikayla, Harper & Easton. Jay also had a very special relationship with each of his cousins. A private service will take place to honor Jay. In lieu of flowers the family requests donations be made to Cornerstone Hospice . Online condolences may be shared by visiting www.bankspagetheus.com. Arrangements are entrusted to Banks/Page-Theus Funerals and Cremations, Wildwood.

The family of Jay G. Jinks III created this Life Tributes page to make it easy to share your memories.

Send flowers to the Jinks family.