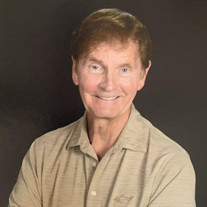 Gene Allan Whitaker, beloved husband, father, grandfather, and friend, passed peacefully, though unexpectedly, on April 14, 2022 at his residence in The Villages, Florida. Gene was born on April 8, 1940 in Bloomington, Illinois to Virgil Sr. and Lucille M. (Fischer) Whitaker. He married his cherished wife, Rebecca Ann (Becky Schurtz) on November 2, 1963 in Peoria, Illinois; she survives. Also surviving are daughters, Vicki (Chuck) Replogle of Kimmell, Indiana and Kelly (Tony) Parks of The Villages, Florida, one brother, Virgil (Leslie) Whitaker of Fairfax, Virginia, three grandchildren (Cris/Kendra Replogle, Aaron/Kaila Replogle, Brittany/Justin Blotkamp -- all of Indiana), fourteen great-grandchildren, and three grandpups. Gene was preceded in death by his father, mother, brother (Rex Whitaker); sister, (Sharon Whitaker Paul); brother, (Larry Whitaker) and grandson, (Brandon Allan Replogle). Gene graduated from Manual High School in Peoria, Illinois in 1958. He served as Pvt E-2 reservist in the US Army from 1963-1969. In 1967, Gene graduated from a four-year foundry apprentice course at Caterpillar, Inc. and later became a Tooling Manager at the Mapleton Plant, where he ultimately retired in 2001 after a 40 year career. Soon after retiring, Gene and Becky left the Peoria/Tri-county area, to permanently relocate to The Villages, Florida. Gene was dedicated, hard-working, and well-respected. Gene spent many years restoring his 57 Chevy and competing in numerous car shows and cruise-ins, winning several honors. He and his wife were members of The River Valley Drifters Car Club in Peoria, Illinois. He enjoyed playing golf and frequenting Dunkin’ Donuts. He was a member of Hope Lutheran Church in The Villages. Gene was also a member of the American Legion Post 347. What Gene treasured most was his family and time spent with them. He will forever be remembered for his smile, kindness, and humor. A memorial service will be held at Hope Lutheran Church in The Villages, Florida on Tuesday, May 31 at 10:30 AM. In addition, a Celebration of Life will be held later in the fall. Memorial contributions may be made to “Brandon A. Replogle ‘Pay it Forward’” (P.O. Box 143 Kimmell, Indiana 46760), a fund in his grandson’s memory that benefits young people seeking higher education or mission service in the West Noble area (Ligonier, Indiana and surrounding areas). Online condolences may be made to the family at https://www.bankspagetheus.com/obituaries/ .

The family of Gene Allan Whitaker created this Life Tributes page to make it easy to share your memories.