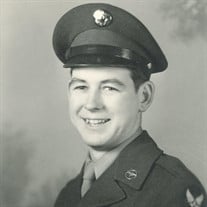 CARR ARNOLD ROBINSON, Jr. (March 10, 1931 – August 24, 2021) Carr Arnold (Bud/Robbie) Robinson, Jr. 90, formerly of The Villages, Florida entered into his eternal rest on August 24, 2021 at Orlando Regional Medical Center in Orlando, FL following a long illness. Bud was the loving husband of the late Natalie Robinson. He was born in Maryland to the late Margaret H. Fair and Carr A. Robinson on March 10, 1931. Bud spent his formative years in Westminster, MD. He graduated from Westminster High School in 1949 where he was a member of the inaugural football team. He was a U.S. Air Force enlistee veteran of the Korean Conflict and also served at Eielson AFB, Alaska. Following his military service Bud began a long career at Westinghouse Air Arm Division (now Northrup Grumman), from which he retired. Bud enjoyed a variety of pastimes outside of his working career. He was a distinguished pistol shooting competitor. He had been the Maryland State Champion and a Camp Perry competitor where he was a President’s One Hundred Awardee. Bud enjoyed many athletic activities including golf, running, skiing and swimming including participating in the Senior Olympics. He was a lifelong Notre Dame fan, especially their football team. He and Natalie enjoyed RVing and visited every state except Hawaii. In retirement they would escape the Maryland winters to Arizona and Florida. In 2010 they decided to permanently relocate and chose The Villages for their forever home. Many great and lasting friendships were established during their traveling and snowbird experiences. Life in The Villages included frequent rounds of golf and competitive game nights in their Cedar Key Lane neighborhood. They were also strong supporters of the The Villages High School booster club. Bud enjoyed country and patriotic music. Buddy (sibling moniker) had a great sense of humor and like to tease ‘The Girls’ (sisters), brother, brothers-in-law, nieces and nephews (all of whom responded in kind). All his life he was an animal lover and shared his life with many dogs and cats. In addition to his wife and parents he was predeceased by his step-father Clarence Fair; sister Catherine Chandler; brother-in-law Ed Floyd; and niece Jessica Robinson. He is survived by his sisters Betty Schlerf, Barbara Malone and Linda Floyd; brother Eugene Robinson and many nieces and nephews. Interment services will be held on September 24, at 12:30 p.m. at Florida National Cemetery in Bushnell, FL. The family is being assisted in final arrangements by Banks/Page-Theus Funeral Home. In lieu of flowers the family suggests memorial gifts be made to the charity of your choice.

The family of Carr Arnold Robinson created this Life Tributes page to make it easy to share your memories.

Send flowers to the Robinson family.