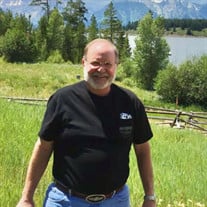 Stephen Wade Gayler, 65, of Venice, Florida passed away on June 3 after a long battle with Lewy Body Dementia and Parkinson’s Disease. Steve was born on July 28, 1955 in Valdosta, Georgia the second child of Jim and Betty Gayler. His early years were spent in various cities and towns as his Father Jim, a Methodist minister, moved the family to different churches. Ft. Lauderdale, Lakeland, Miami, Orlando, Gainesville and Jasper, Florida as well as Atlanta, Georgia were some of the places Steve called home by the time he graduated from Buchholz High School in Gainesville in 1973. Steve’s earliest career work was at the University of Florida in the administrative computing and audio visual area, but he found his life’s work as an animal services officer in both Bartow County, Georgia and Alachua County, Florida. Steve loved animals of all kinds and was known to take into his home strays and animals with special needs. Steve was an avid Harley-Davidson man and loved to ride anytime and anywhere. A long ride to Sturgis some years ago was a favorite memory. Steve was a good friend to many and he had a good sense of humor which he shared frequently with all. He was a member in good standing of the Oxford United Methodist Church where he often served as an usher. He is survived by his Mother Betty, 91, of Venice, his sister Joy Gayler of Spartanburg, South Carolina, his brother Dave and his wife Winnie, and his beloved niece JoJo all of Nokomis, Florida. He will be deeply missed. A graveside service will be held at 11:30AM on Saturday, June 5 at the Pine Level Cemetery in Oxford, Fl. If you would like to make a donation to honor Steve, please donate to the Lewy Body Dementia Association at lbda.org.

Stephen Wade Gayler, 65, of Venice, Florida passed away on June 3 after a long battle with Lewy Body Dementia and Parkinson&#8217;s Disease. Steve was born on July 28, 1955 in Valdosta, Georgia the second child of Jim and Betty Gayler. His early... View Obituary & Service Information

The family of Stephen Wade Gayler created this Life Tributes page to make it easy to share your memories.

Stephen Wade Gayler, 65, of Venice, Florida passed away on June...

Send flowers to the Gayler family.