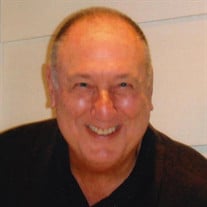 Robert L. Buhrig, (Bob), passed away March 20, 2021 at Cornerstone Hospice in the Villages. Bob’s loving wife of 33 years, Catherine Lynch was at his side when he passed. Bob was born in New York on January 15, 1947 the son of George and Eleanor (Strachner) Buhrig. He was raised in New York City and is survived by his sister, Ricki Buhrig, who lives in the Villages, Florida. Bob, a member of the US Army from 1967 – 1970, worked in areas of communication and counterintelligence and served in Korea and Germany. After serving in the military and working in the corporate world for several years Bob settled in Atlanta, Georgia and found his true calling, working in Law Firm Administration. In 2009, Bob and Catherine retired and moved to the Villages, Florida where they enjoyed an active Villages Social Life, playing golf, cards, games, dancing, traveling and taking many cruises. When he could no longer play golf, Bob took up Shuffleboard and Bocce. From 2012 thru 2016 Bob and his teammate, John Marx won the silver medal in the Shuffleboard senior games. Bob appreciated and was very proud of his loyal and caring friends. For those wishing, memorial contributions in his memory may be directed to the Villages Cornerstone Hospice, 601 Casa Bella Lady Lake, Florida 32162. Online condolences may be shared by visiting www.bankspagetheus.com. Arrangements are entrusted to Banks/Page-Theus Funerals and Cremations, Wildwood, Florida.

Robert L. Buhrig, (Bob), passed away March 20, 2021 at Cornerstone Hospice in the Villages. Bob&#8217;s loving wife of 33 years, Catherine Lynch was at his side when he passed. Bob was born in New York on January 15, 1947 the son of George... View Obituary & Service Information

The family of Robert L. Buhrig created this Life Tributes page to make it easy to share your memories.

Send flowers to the Buhrig family.