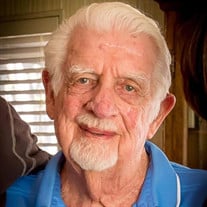 Richard E. Merriman, 94, of Wildwood, Florida went to be with his Lord Tuesday, April 28, 2020. Dick Merriman was born September 15, 1925 in Buffalo, NY to Harry and Hildred (Eisenhaure) Merriman. He was raised in North Reading, Massachusetts and upon graduating high school in 1943 he entered the US Navy. The Navy sent him for specialized training at both Dartmouth and Yale and he was then transferred to Great Lakes in Chicago, Illinois where he completed his service in 1946 at the Fleet Home Town News Center. As a WWII Veteran, he was thrilled to be a part of the Honor Flight to Washington, DC with other vets in 2014. While in Chicago, Dick met and married Eleanore Johnson in 1949. He moved to Baltimore, MD in 1953 where he began his career in the aerospace industry with Martin Marietta and later accepted transfers to Denver, Colo. and Orlando, Florida. Dick and Eleanore had 5 children. He received his bachelor’s degree from Florida Southern in Lakeland in 1973. From 1975 until 1984, he lived in St. Charles, MO. In 1988, following Eleanore’s passing, Dick married Rose. They would spend the remainder of Dick’s 32 years together, loving and encouraging one another. They built a home in Tavares and sold it in 1992 to become full-time RV’ers and see country, family and make new friends. They returned and moved into Continental Country Club in 1999. Dick was an H-O Train enthusiast for many years and then at age 80, he began building model replicas of sailing ships. He loved learning the history of each ship, becoming a source of knowledge about the vessel and crew. He had a rich, deep bass voice and loved to sing, participating in the Continental Country Club Choir and the Grace Bible Baptist Church Choir. His first love was for his Lord. This was evident in all that he did in life and he was quick to share this love, even witnessing to everyone during his final days. Although Dick lived in Central Florida most of his adult life, he never lost that Boston accent which gave special flavor to his wonderful storytelling. Everyone loved hearing him talk. They also loved his family recipe for fudge which he did successfully pass on. He was “Poppy” to his grandchildren and great grandchildren. He will be truly missed by his family and all that knew and loved him. Survivors include his loving wife, Rose Mallard Kirby Merriman; children, Diane Harmon of Zellwood, Bruce Merriman of Sanford, Candy Jensen (Bruce) of CA, Brian Merriman (Casey Ann) of MO, John Kirby (Lisa) of Deltona and Steve Cheek of CA; sister, Betty Correlle of NH; grandchildren, Michelle Gayhart (Kelly) of Eustis, Krista Keller (Rob) of Mt. Dora, Steven Harmon (Stephanie) of Apopka, Jackie Sweeney (Sean) of OH, Joshua Kirby of Deltona, Kathleen Woods (Bryce) of Casselberry, Amy Merriman (Sheri) of MD, Lisa Merriman of Ft. Meyers, Olivia Sugarman of CA, Brett and James Jensen of CA, Leah Baird (Jon) of MO, Elizabeth Moller (Jon) of MO, Ben Merriman (Amanda) of MO and Alison Merriman of MO; great-grandchildren, Kyra, Tanner, Madison, Camden, Jayden, Jackson, Ansley, Lorraine, Rosemary, Michael, Lillian, Jimmy and Brigid. Dick was preceded in death by his first wife Eleanore, daughter, Barbara Cheek and son-in-law, Steve Harmon. Dick’s family will celebrate his life with a service 10:00am, Sunday, July 19, 2020 at 4:30PM at Grace Bible Baptist Church, Leesburg, Florida with the Continental Country Club Honor Guard providing military honors following the service. Interment will be private at the Florida National Cemetery in Bushnell. On-line condolences may be shared by visiting www.bankspagetheus.com.

Richard E. Merriman, 94, of Wildwood, Florida went to be with his Lord Tuesday, April 28, 2020. Dick Merriman was born September 15, 1925 in Buffalo, NY to Harry and Hildred (Eisenhaure) Merriman. He was raised in North Reading, Massachusetts... View Obituary & Service Information

The family of Richard E. Merriman created this Life Tributes page to make it easy to share your memories.

Richard E. Merriman, 94, of Wildwood, Florida went to be with...

Send flowers to the Merriman family.