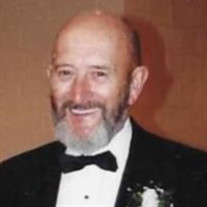 Richard Raymond Brewster, 95, Bushnell, Florida. Eldest son of seven children (Raymond, Irving, Ted, and the late James, Joan and Jean) born to Raymond and Elenore (Hertel) Brewster. Richard is now with his dear sweet wife, Evelyn watching over their children, Judith Beers (partner Dan Cummings), Rhonda Chamberlin, Richard Brewster (late wife Jane) and Sandra (Michael) Wright. Beloved grandchildren, Jeffrey, Kristin, Cody, Ashley, Alyssa, Erin and Joshua; great grandchildren, Colton, Levi and Hunter. The photos of his family always made him smile, he shared the photos with pride. Mr. and Mrs. Richard Brewster were married July 17, 1948 in the First United Presbyterian Church. He was a retired tool and die maker for the Ford Motor Company and volunteered for the Evans Center Fire Hall in Angola, New York. Richard served in the United States Army as a rifleman with an infantry in the battles at Rhineland and Central Europe. He was awarded the EAME Theater Ribbon w/2 Bronze Stars, Good Conduct Medal and the Victory Medal of WWII. Richard's passing is a loss to all that loved him. His joy was traveling with his wife to RV Rally's all over the United States. They finally retired in Hernando Beach, FL until his wife passed away and then Richard moved to Blueberry Hills RV Resort in Bushnell, FL where he had lived many happy years as a member of the "First Street Gang". Richard loved to garden, ride around in his Golf Cart visiting his many friends. A Celebration of his Life will be held in Angola, New York where he will be put to rest beside his dear wife Evelyn. Online Condolences may be shared with the family by visiting bankspagetheus.com.

The family of Richard Raymond Brewster created this Life Tributes page to make it easy to share your memories.

Send flowers to the Brewster family.