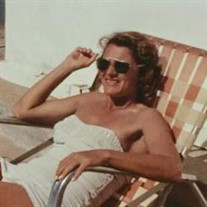 On Thursday, September 26, 2019, Paulette Francis Nolan Lee Emal, beloved mother of four, grandmother, great-grandmother, and great-great grandmother to many, passed away at the age of 99. Dingma, as she was fondly nicknamed by her grandchildren, was born on July 13, 1920 to Thomas and Lillian Nolan in southern Georgia. After the untimely death of her father, the family moved to Miami where Paulette grew up and went to Edison High School, earning an academic scholarship to Florida State University. She majored in Physical Education and upon graduation secured a position with the city of Gainesville, becoming Florida’s first woman to become a municipal Parks and Recreation Director. When the United States entered the war in 1941, Paulette wanted to serve, and also saw enlistment in the Navy as an opportunity to travel outside the country. But, after finishing her basic training in Washington, D.C., Paulette was stationed back to Miami for the duration of her service! She was disappointed, but the result of that assignment was that she met the love of her life, Dr. James Parrish Lee, Lt Commander in the naval medical corp. Paulette and the handsome young doctor fell deeply in love, got married, and moved to his home where the stunning couple became the toast of New York, according to recollections by their contemporaries. They had three children, Clara (“Pudy), Jim, and Richard. Tragically, Paulette’s husband died suddenly when she was pregnant with their fourth child, Steven. The young widow relocated back to Coral Gables to be near her family. Thankfully, Paulette had made a lifelong friendship with Lillie Spavins (Maddox) who was her housekeeper in New York. Lillie stayed with Paulette and her children and became an essential and much loved member of the family. Paulette supported her children by becoming an entrepreneur, owning and operating several small businesses, and later becoming a realtor. Paulette was an athlete. In college, she excelled at volleyball and softball. But, golf is in the DNA of the Lee family, so Paulette learned to play from her husband before he passed. She quickly became one of the best golfers who ever played the sport. She had a natural swing off the tee and never hit anything but a perfectly straight drive down the middle of every fairway. She was a master chipper and had excellent coordination and an eye for putting. Very soon in her golfing career, she made the difficult choice to turn pro or to be a mother to her children. Paulette chose her children. She did continue to play and excel as an amateur golfer, winning many championships over several decades, making enduring friendships along the way. In the mid-1970’s, Paulette became close friends with young LPGA professional, Sue Roberts. They bought a house together in Key Largo and started Reef Realty. By then, Paulette’s children were grown and had begun families of their own. Paulette and Sue operated their real estate company for several years until Paulette moved back to Coral Gables. She met Lloyd Emal on the Biltmore Country Club golf course and they soon married. Paulette and Lloyd moved to Sebring where they lived their last active years. Paulette continued to play golf and make friends. Paulette was an exceptional human being, supportive and generous to all of her children, grandchildren, nieces and nephews. She always encouraged her loved ones to be themselves and to follow their own dreams and aspirations. She was brilliant, witty, playful, incredibly gorgeous, and a person of high integrity. Rare for a person from her birthplace and of her generation, Paulette was completely openminded and unprejudiced about race, ethnicity, and social status. She enjoyed debating politics and was a staunch advocate for human rights. Paulette’s inherent grace and elegant manners allowed her to succeed in the elite society of New York City, but she was more comfortable fishing in the Keys, laughing, tap dancing, and spending time with her family. Paulette was preceded in death by both of her husbands and her sisters and brothers. She is survived by her four children, grandchildren, great grandchildren, great-great grandchildren, and many nieces and nephews. No funeral service is planned at this time.

On Thursday, September 26, 2019, Paulette Francis Nolan Lee Emal, beloved mother of four, grandmother, great-grandmother, and great-great grandmother to many, passed away at the age of 99. Dingma, as she was fondly nicknamed by her grandchildren,... View Obituary & Service Information

The family of Pualette Francis Nolan Lee Emal created this Life Tributes page to make it easy to share your memories.

Send flowers to the Emal family.