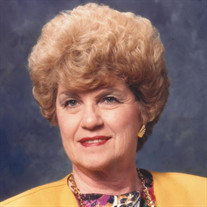 Natalie Gukanovich Robinson, 85, of The Villages, Florida entered into her eternal rest on October 22, 2020 at her home following a battle with cancer. Natalie was the beloved wife of Carr A. Robinson, Jr. She was born in Maryland to the late Zarko (Joe) and Borka Gukanovich on September 14, 1935. She graduated from Arundel High School in Gambrills, MD in 1953. Natalie retired from Westinghouse Corp. (now Northrop-Grumman Corp.) after many years of dedicated service. In retirement she and her husband Carr (Robbie) enjoyed RVing and visited every state with the exception of Hawaii. For a number of years they enjoyed wintering in their motor home, first in Florida and later in Arizona. In 2010 they decided to permanently relocate and chose The Villages for their forever home. Many great and lasting friendships were established during their traveling and snowbird experiences. Natalie’s dedication to any given undertaking, task or pleasure, was always evident in her fierce competitiveness. She and Robbie became avid golfers in retirement. She also enjoyed gardening and competing during the Cedar Key Neighborhood game night. She and Robbie were strong supporters of the booster club at The Villages High School, especially enjoying the football games. In addition to her husband, Natalie is survived by a sister, Jennie Grindberg of Dallas, Texas. She was predeceased by her parents, a sister Julia Parsons and two brothers, Miko (Michael) and Bronko. She is also survived by nieces and nephews. Services will be held at Banks/Page-Theus Funeral Home at 9:00 AM, Saturday, October 31st. Interment will be at Florida National Cemetery in Bushnell, FL. The family is being assisted in final arrangements by Banks/Page-Theus Funeral Home. In lieu of flowers the family suggests memorial gifts be made to the Humane Society/SPCA 994 CR 592A, Lake Panasoffkee, FL 33538.

Natalie Gukanovich Robinson, 85, of The Villages, Florida entered into her eternal rest on October 22, 2020 at her home following a battle with cancer. Natalie was the beloved wife of Carr A. Robinson, Jr. She was born in Maryland to the late... View Obituary & Service Information

The family of Natalie Gukanovich Robinson created this Life Tributes page to make it easy to share your memories.

Send flowers to the Robinson family.