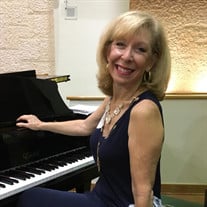 MICHELE LYNN USS Music Director, Piano Player and Interfaith Leader 1953 – 2021 Michele Lynn Uss passed away on May 11, 2021 after fighting a long and heroic battle with a condition that was ultimately identified as ALS or Lou Gehrig’s Disease. Until the very end, she was searching for a solution and hopeful that she would beat this. She is survived by her husband of 46 years, John Uss, her parents Frank and Irene Bressler living in Baltimore, sisters Marlene Hein in San Marcos, CA and Randi Fine in Weston, FL plus her numerous Friends. Michele Bressler was born in suburban Baltimore, Maryland. She studied music at the prestigious Peabody Conservatory of Baltimore and the Hart School of Music in West Hartford, Connecticut. Music was her life. She met her husband, John, during college while he was playing in a band and she was performing solo piano shows. They formed their own band based on their personal connection and love of music called Peppertree. They entertained with an assortment of pianos and electronic keyboards for 18 years including night clubs, weddings, bar mitzvahs and more. Michele was a top award-winning real estate professional in the Hartford Area with Raveis Real Estate. She and John semiretired to The Villages in 2013. After attending her first Friday Night Shabbat Service at Temple Shalom of Central Florida, Michele became the pianist and choir director for seven years until the pandemic started. She always said that her greatest pleasure was looking out at the smiles on Friday Nights as the Congregation sang along. She also played for all the Holidays and Temple Shows. Michele joined the TriCounty Interfaith Peace Partners as a respected Temple Leader. She could always be counted on to play for the services even during the virtual Holocaust Remembrance and Interfaith Services this year. She also played piano for several local churches. Friends described Michele as “not a Piano Player -- but a Piano Prayer”. Some of her beautiful music can be seen and heard at tscfl.org. People who knew Michele understand that she was a friend to many and would take care of others who needed spiritual help, someone to listen or take them to the doctor. She always believed in a “Family of Friends” and treated those who had the privilege to know her as a cherished relative. Funeral Services will take place on Thursday Morning May 13 with a virtual service available at tscfl.org/michele. Donations in memory of Michele can be made to the Cornerstone Hospice (The Villages) or the Temple Shalom Choir Loft Fund.

MICHELE LYNN USS Music Director, Piano Player and Interfaith Leader 1953 &#8211; 2021 Michele Lynn Uss passed away on May 11, 2021 after fighting a long and heroic battle with a condition that was ultimately identified as ALS or Lou Gehrig&#8217;s... View Obituary & Service Information

The family of Michele Lynn Uss created this Life Tributes page to make it easy to share your memories.

Send flowers to the Uss family.