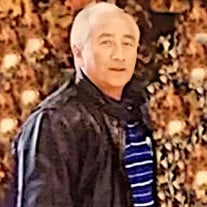 Manuel Antonio Lemus, Sr., 81, of Lady Lake, FL passed away Sunday, February 20, 2022. He was born March 22, 1940 in San Salvador, El Salvador to Francisco Antonio and Virginia "Herrera" Lemus. He graduated as a bookkeeper at the El Salvador institute, which enabled him to work as an accounting assistant. He worked at the Mortgage Bank (Banco Hipotecario) of El Salvador and thanks to his ability and dexterity he won a scholarship to go to Mexico to specialize as a Data Analyst with IBM and upon his return the Bank he was entrusted with the Data Analyst Department processing and using IBM computers with cards. Perforated, which at that time were novelty. He also worked at Statistics and Census, a government office, where he met his wife Irma Esperanza Dominguez with whom he had three children, unfortunately she passed away when their children were still very young, so he decided to emigrate with them to the United States. He also worked at Pepsi and at Southwest. He was also part of the family business. In sports he stood out in soccer since he was a child, he was a member of a team called 'Pipiles', when he grew up he played for a federated team. He also stood out in cycling and participated in several national championships. We must also remember his sons, Manuel Antonio Lemus, Jr. who passed Saturday, February 12, 2022 and Oscar Lemus who passed away Sunday, February 13, 2022. He is survived by his sons, Carlos Antonio Lemus; and Jaime Lemus; life partner, Jean Anderson and many other loving family and friends. There will be a public visitation from 11:00 AM to 12:00 PM Saturday, March 19, 2022 -- Followed by a Celebration of Life Funeral Service beginning at 12:00 PM at Banks/Page-Theus Funeral Home 410 Webster Street Wildwood, FL 34785. Live Streaming will start at 12 pm Saturday, March 19th follow this link... https://webcast.funeralvue.com/events/viewer/70954 OR Go to the tab "Photos and Videos" and click on this link...Live Streaming 12 pm Sat. March 19th

The family of Manuel Antonio Lemus Sr. created this Life Tributes page to make it easy to share your memories.

Send flowers to the Lemus family.