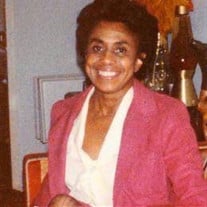 LaSalle Elaine (Gilliam) Gilmore was born on November 21, 1926 in Manhattan, N.Y. to William and Josephine (Gore) Gilliam. Her parent’s sent her to Sewickley, Pennsylvania to live with her Grandparents, Sally and Green Gore. She attended school there and graduated in 1944 from Sewickley High. While in high school Elaine took a civil service test which would shape her employment for the rest of her working life. After her graduation Elaine moved back to New York where she received a temp job through civil service. While at this temp job she met her good friend, Loretta Phipps. Through her temp job Elaine gained full time employment with The Department of Labor, Employment and Training Administration as a Program Specialist. She worked for 41 years before retiring in 1993. June 21, 1958 Elaine married Thomas Gilmore. Sadly they were only together for 7 years, after which time they were divorced on September 7, 1968 and went their separate ways. Elaine enjoyed traveling around the world, gathering mementos and memories with her friends. She also loved to bowl in leagues with her friends and co-workers. Elaine retired and remained in Queens, N.Y. , where she lived most of her adult life. In March 2014, her and her dog Dora, moved to Wildwood, Florida to be close to the only people she knew as family. Her early life friend, Loretta Phipps daughter, Jeanie Grier and Granddaughter, Celeste Johnathan . Elaine was Celeste’s Godmother and in her waning years was taken care of by Celeste. She loved Celeste and always thanked her for all she did. On February 19, 2020 at 11:10pm, Elaine passed away quietly under Hospice care. Elaine is predeceased by her father, William Gilliam Sr, her mother Josephine (Gore) Gilliam and her Brother William (Billie) Gilliam Jr. She will be missed by her adopted family, Celeste and Alan Johnathan and Jeanie and Tab Grier. She touched many people in her 93 years and made many new friends here in Florida, who will also miss her. Rest In Peace Aunt Elaine and May God bless you!

LaSalle Elaine (Gilliam) Gilmore was born on November 21, 1926 in Manhattan, N.Y. to William and Josephine (Gore) Gilliam. Her parent&#8217;s sent her to Sewickley, Pennsylvania to live with her Grandparents, Sally and Green Gore. She attended... View Obituary & Service Information

The family of LaSalle Elaine Gilmore created this Life Tributes page to make it easy to share your memories.

Send flowers to the Gilmore family.