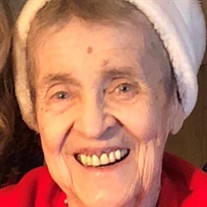 Julia “Julie” H. Barrett, 88, Tavares, Florida passed away on August 24, 2020 at Mike Conley Hospice House in Clermont after a brief illness. She was born Oct. 3, 1931 in Elwood, Indiana to Harlie and Sophia (Wunder) Harbit. Julie joined the U.S. Navy in August 1951 and began photography training at the U.S. Naval Photographic Center in Washington, D.C. After returning to her native hometown in 1960 with her two-year-old daughter, Theresa, she began taking newborn baby photos at Mercy Hospital in Elwood and snapped 500 pictures the first year. She also began taking sports and wedding photos in the 1970s. “To capture one twenty-fifth of a second of one’s life is a miracle to me,” Julie once said in a newspaper interview, pleased to have been identified as a “memory maker.” She also was called “Momma Barrett” by many Elwood youths. In addition to photography, she worked from 1964-1968 as deputy clerk treasurer in Elwood. She also served as the first female veterans’ representative at the Kokomo office of the Indiana Employment Security Division. She started at the Kokomo office in 1969 before transferring to the Anderson, Indiana office in 1984, after the birth of her first grandchild named after her. Julie moved to Florida in May 2007, settling in Wildwood to be closer to family. As a devout Catholic, Julie has been a parishioner of Indiana parishes of St. Joseph Catholic Church in Elwood; St. Patrick’s in Kokomo; St. Ambrose in Anderson; and St. Mary’s in Alexandria. She was a parishioner of St. Vincent de Paul in Wildwood, Florida, and for the past two years attended St. Patrick’s in Mount Dora, Florida. She is survived her daughter, Theresa Campbell of Tavares; a sister, Kathy (James) Davis, Pigeon Forge, Tennessee; three granddaughters: Julia (Troy) Piwowarski of San Francisco, California; Emily (Jeff) Gartner of Seattle, Washington; Maria Campbell of Oviedo, Florida; two step grandchildren, Kyle Campbell of Zionsville, Indiana; Kimberly (Jonnie) Harpel of Zionsville, Indiana; two nephews Roger Davis of Russiaville, Indiana; Gary Davis of Pigeon Forge, Tennessee; and good friend, Donna Barrett of Tavares, Florida. Julie was preceded in death by an infant son, David; and her parents. She will be buried at the Florida National Cemetery in Bushnell, Florida. A private memorial service will be held at a later date. On-line condolences may be shared by visiting www.bankspagetheus.com. Arrangements are entrusted to Banks/Page-Theus Funerals and Cremations.

The family of Julia H Barrett created this Life Tributes page to make it easy to share your memories.

Send flowers to the Barrett family.