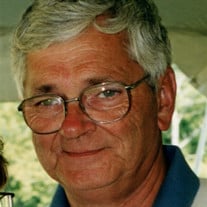 Joseph P. Tomasello, Jr, 77, of Wildwood, FL passed away Tuesday, April 16, 2019. Mr. Tomasello was born July 1, 1941 in Cambridge, Massachusetts to Joseph P. Tomasello, Sr and Alice (Dooley) Tomasello. He was an U.S. Air Force veteran. Joe retired as the Director of Retail Operations for the Vermont Department of Liquor Control and moved to Wildwood in 2002 from East Montpelier. He was very active in Continental Country Club where he loved to golf. Joe belonged to the Woodcrafters Club and along with other wood crafts he would start making wooden Christmas trees for the Wildwood Preschool children in July so they would have enough for all the children in December. Joe was also a co-captain for the Inter-Community Billiards League and past President of the CCC Board of Directors. Survivors include his loving wife of 54 years, Linda; children, Deborah Emmons of Berlin, VT, Deidre Lamberton of E. Montpelier, VT and Joseph & Andrea Tomasello, III of Richmond, TX; sister, Claire & Jack McCabe of Burlington, VT; 5 grandchildren;a great-grandson and many nieces and nephews. Joe was preceded in death by his brother, John Tomasello. Joe wrote a memoir about his life and he finished this with a quote from the novel The Match by Mark Frost which really expresses who he was: '"Life is not a journey to the grave with the intention of arriving safely in a pretty and well preserved body. But rather to skid in broad side thoroughly used up, totally worn out and loudly proclaiming... Wow, what a ride!" I truly believe I have lived or tried to live my life skidding in broad side.'There will be no public service, a private family service may be held in the future. For those wishing, memorial contributions may be made in Joe’s honor to the Wounded Warrior Project, www.support.woundedwarriorproject.org or the American Liver Foundation, www.liverfoundation.org. On-line condolences may be shared by visiting www.bankspagetheus.com. Arrangements are entrusted to Banks/Page-Theus Funerals and Cremations, Wildwood, FL.

The family of Joseph P. Tomasello Jr created this Life Tributes page to make it easy to share your memories.

Send flowers to the Tomasello family.