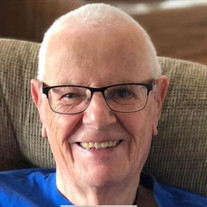 Mr. Joseph “Joe” Rae Strubinger, age 83, of Oxford, Florida, passed away in the late morning, September 1, 2021, at The Villages Hospice House. Joe was born on December 17, 1937, in Chicago, Illinois to Melvin Rae and Bessie Odile Strubinger. His first wife, Reba Tyner passed away in 1985. He is survived by his wife of 34 years, Joan, and his son Ray. A strong family man, he is also survived by an extensive biological and blended family: Liza (Dale) Crenshaw and John (Jennifer) Zapata; his grandchildren Jaimie (Lance) Kinney, Jessica (Drew) Arnstein, and Michael and Justin Zapata; his treasured great grandchildren who affectionately called him “Papa Joe”—Presley, Easton, Kennedy, and Jack; other surviving family members are Bessie Crowley, Jeannie Crowley, Bill and Barbara Kane, and a long list of cousins from his birth state of Illinois. Joe’s family moved to Florida in 1953. He graduated from Wildwood High School in 1955. He then attended the University of Florida, where he earned a Bachelor of Science degree in Agriculture. He served in the agriculture industry for many years managing orange groves in South Florida and the family orange grove off Highway 466, an area we now call The Villages. He also owned and operated Wildwood Farm Supply, serving the needs of farmers and ranchers throughout Sumter County. A devout Christian, Joe would make friends with everyone he encountered and always helped others in need. He served several key civic organizations as a Mason, Shriner, and board member for the Pine Level Cemetery Association. A man of high character, he believed in doing the right thing and always displayed that in his daily activities. No matter where he went, he was never alone—he always traveled with God. He was an exceptional example to his family and those memories will long continue to influence and survive with his passing. An ardent sports fan, you could always count on him to be there to support his beloved Florida Gators and Chicago Cubs/Bears. There’s not a fall Saturday or Sunday where he would miss a game. Though he was surrounded by Seminole family members, he kept the peace through the heated rivalry and always enjoyed conversation about the sports activities. He will always be remembered as a proud and supportive husband and father who only ever wanted to provide the best things in life for his family. Joe dealt with great difficulty walking, especially later in life, due to circumstances when he was born. Despite the physical challenges, he never let it stop him from trying to do what he wanted to do. As we learned from Paul in the New Testament, who endured tremendous suffering, from shipwrecks and hunger to unjust imprisonment and beatings (2 Corinthians), he knew as well as anyone that situations can be painful and seemingly hopeless. But he finally discovered that true contentment came from Jesus, not the situation he found himself in. Joe took this scripture to heart and demonstrated how to respond to adversity and circumstances out of your control. He was and will always be the pillar of strength for the family and he will be missed forever. Services will be held at Oxford Assembly of God for all friends and family able to attend during these difficult Covid times. In lieu of flowers, you may donate in Joe’s name to The Villages Hospice House where he received such compassionate care in his final days or to Oxford Assembly of God Church.

The family of Joseph Rae Strubinger created this Life Tributes page to make it easy to share your memories.

Send flowers to the Strubinger family.