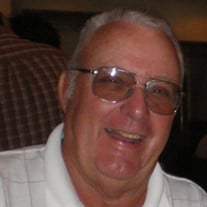 John Desmond Stanton, 83, of The Villages, FL, peacefully passed away at home on September 25, 2019, surrounded by his wife and children. He was born on August 7, 1936 to U.S. Army Colonel Julius Desmond and artist Elizabeth (Kurtz) Stanton in Plattsburgh, NY. John was passionate and had a great sense of humor and a commanding presence. He was a natural athlete and sports fanatic and engaged in the current affairs and politics of the day and loved a good debate. He was honest, loyal, generous and accepting of others, a lover of pets, a good person of high character who could be counted on by his loved ones, friends and work colleagues. He was a natural leader, mentor and coach; a devoted husband, father, grandfather and family member. His life story is an insightful tale. Raised in a military family, he attended 13 schools in 12 years, quickly learning that athletics were a great vehicle to adapt and transition to new places. He excelled in basketball and baseball, eventually playing in the NY Giant minor leagues as a shortstop/2nd baseman. He was a baseball coach for many teams and loved to umpire with an entertaining flair, as baseball was his true passion. A second passion was golf and he played 4-7 times a week right through to his 80’s. The love of his life was Joy (Joyce Carol Miller) whom he adored up until his last breath. They were married 57 years and had 3 children, Tracey, Sondra, and John Jr. They had many adventurous moves over the span of his career from Maryland to New Jersey to Michigan to Delaware to Thailand to Vermont to New York and, finally, Florida. John dreamed of owning a house on the lake and he and Joy designed and built their dream home on Seneca Lake in Himrod, NY, and later owned another lake house on Cayuga Lake in Ithaca, NY. Educated with a BS in Marketing from the University of Vermont, he worked in various retail positions for the Army and Air Force Exchange Service, ending with a 2-year stint in Bangkok, Thailand, at which time he decided to pursue an MBA at his alma mater. He became Assistant Registrar at UVM while completing his MBA and ended his working career with 27 years as the Registrar at Ithaca College. During his time at Ithaca College he served as Treasurer and later as President of MSACROA, the regional registrars’ association. John is survived by his sister Jan, wife Joy, children Tracey (Chris) Gatland, Sondra Stanton-Dyrlie, and John Stanton Jr. (Susan); grandchild Pierce Dyrlie and Gatland grandchildren, Louis (Emma), Chase, Morgan and Erica. He was predeceased by his parents and sister Sally. A memorial service will be held on Cayuga Lake (TBA) in Ithaca, NY, on November 9th at 2:00 p.m. In lieu of flowers, memorial contributions may be made in his honor to Cornerstone Hospice Foundation, 2445 Lane Park Road, Tavares, FL 32778, or online via https://web.cshospice.org/foundation/giving.

John Desmond Stanton, 83, of The Villages, FL, peacefully passed away at home on September 25, 2019, surrounded by his wife and children. He was born on August 7, 1936 to U.S. Army Colonel Julius Desmond and artist Elizabeth (Kurtz) Stanton... View Obituary & Service Information

The family of John Desmond Stanton created this Life Tributes page to make it easy to share your memories.

Send flowers to the Stanton family.