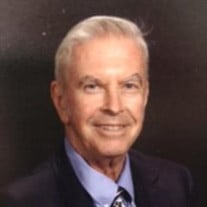 John Lawrence Rutschow (“Jay”), most recently of Mt. Dora, Florida, passed from this life on Sunday, May 9, 2021. He was 81 years old. Jay was born in Toledo, Ohio on June 3, 1939, the son of John William and Betty Jane (Algeo) Rutschow. He was a graduate of Whitmer High School (1957) and attended both Wittenberg College and the University of Toledo. On June 14, 1958, Jay married Sandra Louise Heffley. They were married for 58 years and, together, raised two daughters. In 1973, the family relocated from Temperance, Michigan to Yalaha, Florida. During his life, Jay worked at a variety of occupations, eventually retiring from the St. John’s River Management District in May 2006 after 28 years of service with the District. Outside of work, he enjoyed a number of different hobbies and pastimes including amateur photography, coin and stamp collecting, model railway construction, and raising tropical fish (just to name a few). However, nothing captured Jay’s interest and enthusiasm more than the fine art, skill, and fun of bowling. Joining his college team, Jay quickly developed a love for the game. He became an avid bowler and fervent supporter of the sport, spending over 50 years of his life on the lanes in leagues and tournaments, and earning a plethora of accolades and awards for high scores and achievements. He was ultimately inducted into the American Bowling Conference Leesburg Men’s Bowling Association Hall of Fame in 1991. Jay was a life-long Episcopalian and was a member of Leesburg Florida’s St. James Episcopal Church for over 47 years. He was also an associate member of Morrison United Methodist Church (also in Leesburg) for over three years. Jay was predeceased by his wife, Sandy. He is survived by his daughters, Karen R. Williamson of Eatonton, Georgia, and Pamela S. Luning (Ed) of Church Hill, Tennessee. He is also survived by his grandson, Edward John Luning (Sarah), and by his sister Carol Cassazza (Clarence) and nephew, Jeff Casazza (Karin). In addition, he is remembered fondly by numerous friends and associates. A memorial service is currently not scheduled. To honor Jay’s memory, the family requests that donations be made in Jay’s name to St. James Episcopal Church in Leesburg, Florida or to another charity of your choice. Online condolences may be shared by visiting www.bankpagetheus.com.

The family of John Lawrence Rutschow created this Life Tributes page to make it easy to share your memories.

Send flowers to the Rutschow family.