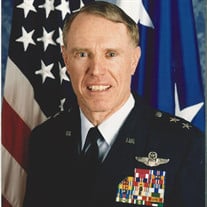 John M. Danahy January 1, 2022 John Michael Danahy, son of Rita Thurston Danahy and Raymond J. Danahy, was born on June 15, 1944 in Buffalo NY. He graduated in 1958 from St. Bonaventure Elementary, in 1962 from Bishop Timon High School, and in 1966 from the University of Buffalo with a BS in Education. After teaching in the West Seneca NY School District, he began a long and distinguished career in the Air Force, retiring as a Major General. John had a long list of medals and awards including the rarely given Distinguished Flying Cross for heroism in risking his life to evacuate and save hundreds of innocent civilian refugees during the Vietnam War. John had over 6,000 hours piloting military aircraft and over 14,000 hours flying commercial jets for Eastern and United Airlines. John was a loving husband, father, grandfather and great grandfather and is survived by his devoted wife of 53 years, Janice (Dawson) Danahy of The Villages, FL. John was predeceased by his daughter Coleen Hullinger and is survived by: Coleen's husband Sean and their five children; Ayden, Owen, Austin; Ian and his spouse Ellie; Erin and her spouse Dagen Fischer; and their two children Lyla and Alice; John's daughter Kelly, her spouse Stephan Walters and her children Blaise and Katie; John's son Kevin and his wife Brittany and their children McKenna and Shea; John's 5 brothers Paul, Dan, Tom, Terry and Jim Danahy and his sister Mary Pat Morrison and all their families. Memorial services will be held on Friday Jan 21, 2022 at 10:30 am from St. Vincent DePaul Catholic Church, 5323 E County Rd 462, Wildwood, FL. 34785; followed at 1PM by honors at the National Military Cemetery 6502 SW 102nd Ave., Bushnell, FL. 33513; and then a 3:00 PM Celebration of John’s life at the Eisenhower Recreation Center 3560 Buena Vista Boulevard, The Villages, Fl. 32163. In lieu of flowers donations may be made to Cornerstone Hospice 601 Mariposa Way, The Villages, Florida 32162. John's Service at St. Vincent de Paul Catholic Church will be LIVE STREAMED...... https://sumtercatholic.org/funeral/ use this password: svdp2021 Banks/Page-Theus Funeral Home 410 Webster St. Wildwood, FL 34785 is in charge of funeral arrangements.

The family of John Michael Danahy created this Life Tributes page to make it easy to share your memories.

Send flowers to the Danahy family.