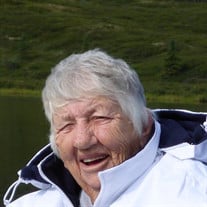 Jean Doll Weddle of Continental Country Club in Wildwood, Florida, passed away on Friday, September 18, at her home in Continental surrounded by her family. Born in Frederick, Maryland, to Charles Clifford and Freda (Smith) Doll on July 7, 1926, young Jean attended elementary school at Parkway and high school at St. John’s. Mrs. Weddle earned her bachelor’s degree from the College of Wooster in Ohio before returning to Frederick where she met her future husband John Douglas Weddle through their work as Scout leaders at St. John’s Catholic Church where they married in 1951.In the years that followed, she raised seven children while serving in PTAs (often as an officer), coaching softball and girls’ basketball, and leading Cub Scout, Brownie, and Girl Scout troops as her family moved through seven states. In 1974, the Weddles moved their family overseas—first to Okinawa and then to Korea where they lived for almost eight years. In Korea, Mrs. Weddle taught at Seoul International School for seven and a half years, educating children from 72 countries in math, chemistry, and physics. In 1981, she insisted on adding instruction in computer programming even though her headmaster and principal labeled computers as a passing fad. In 1983, the Weddles moved to Florida where Mrs. Weddle taught one year at King’s Academy in Wildwood before retiring. In her retirement, she played golf (helping to found the Nine Hole Ladies Golf Club at Continental) and softball (often coaching the team as well as pitching). She won multiple awards for her volunteer work with numerous groups including the Friends of the Wildwood Library and Pilot Club as well as awards for her tutoring children in math at Wildwood Elementary during the day and adult candidates for a GED in the evening. She used to say that she worked more hours after her retirement than before. Predeceased by her husband in 1989 and her older son Cmdr. Jeffrey D Weddle (USN, retired) in 2017, Mrs. Weddle is survived by her younger son James David Weddle of Bellingham, Washington and her five daughters—Jean Douglas Weddle and Judith Weddle Johnson (and her husband Philip) of Wildwood, Florida; Joan Deborah Weddle of Bellevue, Washington, Jacqueline Denise Weddle of Issaquah, Washington, and Janet Diane Weddle of Bothell, Washington--and her daughter-in-law Lee (Mueller) Weddle of Virginia Beach, Virginia, as well as six grandchildren and six great-grandchildren residing in Virginia and Washington state. In lieu of flowers, Mrs. Weddle requested that donations be made to the St. Vincent de Paul Catholic Church in Wildwood.

Jean Doll Weddle of Continental Country Club in Wildwood, Florida, passed away on Friday, September 18, at her home in Continental surrounded by her family. Born in Frederick, Maryland, to Charles Clifford and Freda (Smith) Doll on July 7, 1926,... View Obituary & Service Information

The family of Jean Doll Weddle created this Life Tributes page to make it easy to share your memories.

Send flowers to the Weddle family.