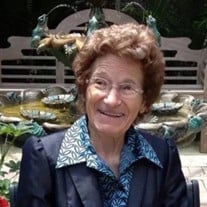 Janice M. Chamberlain, 94, of Longwood, formerly of Avon Park, passed away Tuesday, April 27, 2021. Mrs. Chamberlain was born May 13, 1926 in Toledo, OH to Clayton F. Wolfe and Laura Lee (Grove) Wolfe. She retired as an Elementary School Teacher working with 1st and 2nd grade students both in public schools and in church schools. Janice was a Pastor’s wife and took that role very seriously ministering to people her entire life. After retiring as a teacher, she began cleaning churches where she could still minister to others. She was the custodian for the Avon Park Seventh Day Adventist Church until she was 80 years old. Janice moved to Longwood about 5 years ago from Avon Park and was a member of the Forest Lake Seventh Day Adventist Church in Apopka. Survivors include her children, Shari Chamberlain (Ruben Ruban) of Longwood; Kevin J. Chamberlain of Lake Placid, and Mark Chamberlain of Ashland, OH; brother, Don Wolfe of Columbia, MD; sister, Carol Jean Koester of Nashville, TN; grandchildren, Arthur Chamberlain, Jacque Chamberlain, Ryan Chamberlain, Dustin Chamberlain, and Amanda Chamberlain; 6 great-grandchildren. Janice was preceded in death by her loving husband, Pastor Lyle Chamberlain on October 28, 2011 and her son, Randy Ray Chamberlain. There will be a Memorial service held on Saturday, May 22, 2021 at 4:00 pm. Located at Forest Lake Seventh-Day Adventist Church, 515 Harley Lester Ln. Apopka, FL 32703. The Service also can be viewed by a Live stream from the churches website, www.forestlake.church. In lieu of flowers donations may be sent to Hope TV Channel at www.hopetv.org or It is written TV program at www.itiswritten.org. On-line condolences may be shared by visiting www.bankspagetheus.com.

The family of Janice M Chamberlain created this Life Tributes page to make it easy to share your memories.

Send flowers to the Chamberlain family.