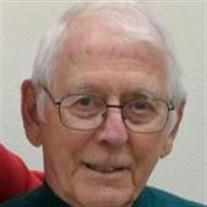 James Douglas Faison, age 87 of The Villages, passed away peacefully at his home on May 9, 2019. James was born on April 19, 1932 in Richmond, Virginia to Herbert Lane and Helen (Holt) Faison. James joined the Air Force on April 14, 1952 and proudly served his country during the Korean War. James then worked for the rest of his career for the United States Government in Supply Chain Management for the United States Military and office equipment repair. James loved to fix things and did carpentry work for his family. James married his wife Kristie on February 14, 2014 and moved to The Villages in 2014 from Richmond, Virginia. James attended the New Covenant united Methodist Church in The Villages, was a member of the Virginia, Club, DuVall Social Club, Daybreak group at the Odell Recreational Center and the Joy Group at the church. James is survived by his wife Kristie of 5 years, son Mark (Diane) Faison of Richmond, VA, son Robert (Patricia) Faison of Crewe, VA, daughter Robin (Lonnie) Johnson of Powhatan, VA, step-son Ronnie Osterman of Greenborough, NC, grandchildren, Danielle, Scott, Aaron, Ethan, Colby, Robbie, Justin, Cayla, great-grandchildren, Degan, Dawson, Damon, Zoey, and Milo. James is preceded in death by his parents, wives Dorothy and Ann, brother Herbert Lane Faison and sister Barbara Anne McCabe. James was a true gentleman and a man of God. He lived an adventurous life surrounded by those he loved, and realized his dream to live in sunny Florida in The Villages with his wife Kristie. He was truly an inspiration to his family and friends. He is remembered by us as a Super Hero and is now an angle in heaven. He is “The wind beneath our wings”. A visitation will be held on Wednesday May 15th at the St. John Newmann Catholic Church in Richmond, Virginia at 7:00 with a prayer service to be held at 7:30. A graveside service with full military honors will be held on Thursday, May 16th at 1:00 PM at the Sunset Memorial Park in Richmond.

James Douglas Faison, age 87 of The Villages, passed away peacefully at his home on May 9, 2019. James was born on April 19, 1932 in Richmond, Virginia to Herbert Lane and Helen (Holt) Faison. James joined the Air Force on April 14, 1952... View Obituary & Service Information

The family of James Douglas Faison created this Life Tributes page to make it easy to share your memories.

James Douglas Faison, age 87 of The Villages, passed away peacefully...

Send flowers to the Faison family.