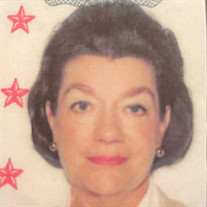 Inez Hanken Gallinaro, 89, passed away on May 31, 2021 at Freedom Pointe Skilled Nursing Center and Hospice facility in The Villages, Florida. Born on December 31, 1931, Inez was the only daughter of John and Agnes Hanken of Ossian, Iowa. She received her early education in Iowa and, after teaching for two years in elementary education, she continued her studies at Marquette University, Milwaukee, Wisconsin, where she earned her BA. She married her husband of 56 years, Nicholas F. Gallinaro in 1957. After a two-year work assignment in Australia, they settled in Middletown, NJ for over 40 years, where they raised their four sons. She continued her work in education and also in sales and buying for a ladies dress shop in Tinton Falls, NJ. Inez’s strong Roman Catholic faith led her to enjoy the ministry of Extraordinary Minister of the Eucharist both at St. Catherine’s Catholic Church in Holmdel, NJ and also at St. Vincent de Paul Catholic Church in Wildwood, FL. In addition to being an avid tennis player and golfer, Inez and her husband enjoyed many years of domestic and international travel both for business and pleasure. They moved to The Villages, FL in 2006 and enjoyed The Villages lifestyle until March 2014 when her beloved husband Nicholas passed away. In recent years, reading had replaced tennis and golf, which was most satisfying because in years past there was no time to “sit and read”. Inez was predeceased by her parents, her infant daughter Agnes, her husband, and her seven brothers Cyril, Donald, Vernon, Roger, Orville, Gervase, and Alan Hanken. She is survived by four sons and daughters-in-law, Michael and Cynthia, James and Yung-Hee, Stephen and Lauretta, and Robert and Nancy. She is also survived by ten adult grandchildren, Jessica (William), Daniel (Anna), Lauren, Tyler, Michelle (Michael), Thomas (Katie), Nicole, Tia, Andrew, and Ashley, and by two infant great-grandchildren, Anthony and Nicholas. She is also survived by many nephews and nieces. In lieu of flowers, donations can be made to the St. Vincent de Paul Catholic Church Debt Reduction Fund, 5323 E County Road 462, Wildwood, FL 34785. Funeral arrangements are conducted by Banks/Page-Theus Funeral Home of Wildwood, FL. Burial/inurnment will be scheduled later at Mount Olivet Cemetery in Red Bank, NJ.

Inez Hanken Gallinaro, 89, passed away on May 31, 2021 at Freedom Pointe Skilled Nursing Center and Hospice facility in The Villages, Florida. Born on December 31, 1931, Inez was the only daughter of John and Agnes Hanken of Ossian, Iowa.... View Obituary & Service Information

The family of Inez H. Gallinaro created this Life Tributes page to make it easy to share your memories.

Send flowers to the Gallinaro family.