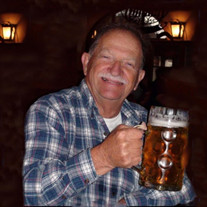 George Broughton passed away peacefully on February 8, 2022 at The Willows Memory Care Facility, Oxford, Florida. George was born on February 1, 1938 in West New York, New Jersey. He attended Chelsea Career and Technical School in Manhattan, NY. After graduation, he worked for CGR Medical Corp and GE Medical as an X-RAY Service Engineer before he retired in 2004. In 1960, George married the love of his life, Judy, and had two beautiful children- Colonel (R) George Broughton II, MD, PhD, who served over 20 years in the US Army as a general and plastic surgeon and Francine Ann Broughton, who works as the head paralegal in the New York State Attorney General Office, Poughkeepsie Regional. Drafted into the Army in 1961, George served as an X-ray repairman in the 2nd Infantry Division until 1963. George had a wide range of hobbies. He loved fishing, hunting, taking cruises, playing golf, and competing in cowboy shoots with his twin brother, Ronald. George will be remembered for his exuberant tales of "true-life" stories to his friends and family, with each telling of the story becoming more elaborate and made even more colorful by his quick blushing. George was very skilled in strategy games and enjoyed playing board and card games for hours and willing to include anyone as a team member or partner. George is survived by his wife Judith; his son and daughter-in-law George Broughton II and Nicole Borgiet; daughter Francine Broughton (and son-in-law Robert Sirois); 9 grandchildren Danyka, Adara, George III, Braeden, Aeslyn, Kallen, Syana, Cheyenne, and Sophia; 6 great grandchildren; and siblings Robert, Jacki, and Arthur. George is preceded in death by his mother Wilhelmina and siblings Ella, Delores, Peter, Ronald, and Margaret. Relatives and friends are invited to attend George Broughton's funeral: Friday, March 11, 2022 at Banks/Page-Theus Funeral & Cremations, 410 N Webster Street, Wildwood, Florida. Gathering of Family and Friends - Visitation 11 am to 12 pm Celebration of Life Funeral Service: 12 pm Graveside Service with Honors: 2 pm at the Florida National Military Cemetery, 6502 SW 102nd Avenue, Bushnell, Florida. In lieu of flowers please donate to the Alzheimer's Association (https://www.alz.org/) or a similar charity of your choice. The family would like to thank The Willows Memory Care Facility for their tenderness, respect, and care of George.

The family of George Broughton created this Life Tributes page to make it easy to share your memories.

George Broughton passed away peacefully on February 8, 2022 at...

Send flowers to the Broughton family.