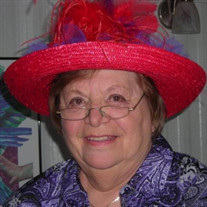 Constance “Connie” Malodziejko Ochnio, beloved wife of the late Stanley Ochnio, passed away on Friday, September 11 in Sebring, FL from COVID-19 complications. She was born in New Britain, Connecticut on November 16, 1931 and the daughter of the late John and Bronislawa (Kryszczynska) Malodziejko and a graduate of New Britain High School. She had a wonderful spirit and lifted the hearts and souls of everyone she came in contact with. Connie was a generous person who always supported anyone in need. She will be missed by many. She was the Office Manager of the Connecticut State Council of Machinists for 23 years and retired in 1993. Connie was an avid bowler. She was a member of the Girls Northern League, Lady Duckpin Doubles, and the Glastonbury Mixed Doubles League and often traveled to Maryland to bowl in the National Duckpin Association’s national tournament. After she retired, she loved to travel, especially to Poland to visit family. She was very creative and artistic. Her passion in later life was knitting and crocheting. She created afghans, sweaters, hats, scarfs and mittens for her family and friends. She also donated these homemade items to cancer and hospice wards at local hospitals. For many years, she knitted hundreds of hats and gloves that were distributed to the children in the Manchester, CT Public School System. Each year she donated a handmade afghan to the Manchester Education Association’s fund raiser. She also had an avid interest in family history and genealogy. In addition, she was a huge fan of the University of Connecticut basketball team and loved to watch the Huskies. A few years ago, she traveled up from Florida to watch the UCONN Women play at Gampel Pavilion. The Christmas holidays were always special to her and she carried on her mother’s tradition of a huge Christmas Eve gathering. The door to her home was open to all family, friends and neighbors. Having everyone together for the holiday always brought her great joy. She was active in the Polish Community after her retirement. She served as Secretary to the New Britain Dozynki Committee, Secretary to the Greater Polish American Council of Greater New Britain, the Connecticut Federation of Polish Americans and Secretary-Treasurer and co-founder of the Polish Genealogical Society of Connecticut (later to become the Polish Genealogical Society of Connecticut and the Northeast.) Additionally, she was a volunteer at New Britain General Hospital for five years in the Breast and Infection Center and other departments as needed. When she moved to Florida she became a member of the Whisper Lake Whisperette Red Hats from 2009 - 2015. “Connie” was predeceased by her brothers and sisters: Apolonia, John (Cecilia Bobrowska), Regina Swanson (Mortimer), Casimir “Ginzy”, Lucy Kaminsky (Edward), and Ann Vincenti (Mario) Connie leaves behind her beloved family, including her sons, Stanley Ochnio and his wife Lyn of Florida and Carl Ochnio and his wife Laurie in Connecticut. She also leaves two grandsons behind. Benjamin Ochnio and his wife Cristina and Timothy Ochnio and his girlfriend Megan Carlo. She also leaves her step-granddaughter, Stephanie Anderson and four great- grandchildren including: Brianna, Isaiah, Alexis, and Great-Great -Granddaughter Cloe, as well as numerous nieces and nephews. She also left her good friends Ruth Wright of Sebring, FL, Bill and Vicki Cooper of Illinois and her feline companion, Mandy. The family would like to extend thanks to her great Florida neighbors Kathy, Mike and Marianne, who looked in on Connie and offered her assistance as needed. Due to COVID-19, services will be private and at the convenience of her family. She will be interned beside her late and loving husband, Stanley Ochnio at Sacred Heart Cemetery in New Britain, CT. In lieu of flowers, donations can be made to St. Catherine Church, 820 Hickory Street, Sebring, Florida 33870 or a charity of your choice. On-line condolences may be shared by visiting wwww.bankspagetheus.com.

Constance &#8220;Connie&#8221; Malodziejko Ochnio, beloved wife of the late Stanley Ochnio, passed away on Friday, September 11 in Sebring, FL from COVID-19 complications. She was born in New Britain, Connecticut on November 16, 1931 and the... View Obituary & Service Information

The family of Constance M Ochnio created this Life Tributes page to make it easy to share your memories.

Send flowers to the Ochnio family.