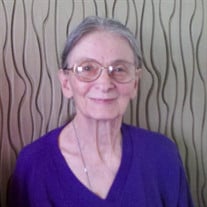 COLLEEN HELEN PRIDMORE NOVIELLO On October 31, 2020 Colleen Noviello passed on. Colleen died suddenly of natural causes while holding hands with her daughter Phyllis who was sitting next to her, and reminiscing about a recently seen television... View Obituary & Service Information

The family of Colleen Helen Noviello created this Life Tributes page to make it easy to share your memories.

Send flowers to the Noviello family.