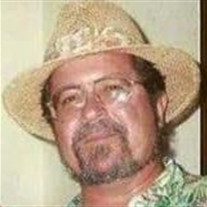 Claude Alan Canady, 68, passed away peacefully on Thursday, February 20, 2020 at Cypress Care Center in Wildwood, FL. Claude was born on September 27, 1951 at St. Luke's Hospital in Cedar Rapids, IA to Floyd and Winifred (Newman) Canady. He graduated from Marion High School, was an Eagle Scout, and earned his Bachelor's degree in Communications from the University of Iowa. After graduation, he married Carol Harvey and had 3 children, Shelley, Scarlett and Candice. He worked as a traveling salesman for companies such as Mark III and Toyota Forklift. In the 80's he moved down to Brandon, Florida and re-married the love of his life, Lyn Krutsinger, in 1988. They opened a bar together in the Crystal River area and then he transitioned to working as a forklift operator for the Wal-Mart Distribution Center in Brooksville for over 20 years. Claude will be remembered fondly for his fun personality, hard-work ethic, and love for animals. He is survived by two of his daughters, Shelley Cross (Tim) of Anamosa, Iowa and Scarlett Kropp (Roger) of Clayton, North Carolina. He has 4 grandchildren, Hannah Walker (Jeremy), Christopher Keller, Isabelle Kropp, Alexander Kropp and one great-grandchild named Grayson Walker. He is also survived by his brother Vaughn Canady (Sandy) of Waconda, South Dakota and Vaughn's children, Erika Haas (Brad), Aaron and Drew Canady. He was preceded in death by his wife, Lyn Canady, his parents, his sister Tona and his daughter Candice. A celebration of life for both Claude and Lyn will take place in October of this year.

The family of Claude Alan Canady created this Life Tributes page to make it easy to share your memories.

Send flowers to the Canady family.