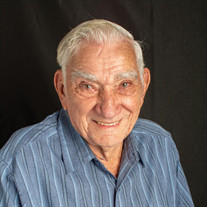 Charles Seward Lambright, 87, of Avon Park, FL passed away Wednesday, March 30, 2022. He is survived by his loving wife, Shirley M. Lambright, and four sons and their wives, Wayne (Vealda), Ron (Irene), Mike (Connie) and Dan (Karen). He was born in South Daytona, FL on May 6, 1934. He was the oldest son of Louise Hall Lambright, and Seward Irving Lambright. He had 3 siblings, Robert Lambright, Barbara Lambright Monahan and Richard Lambright. He is preceded in death by his mother, father and sister Barbara. He met his wife, Shirley, when they were in band together at Mainland High School, Daytona Beach, Florida. They were married on June 6, 1954 and would have celebrated their 68th wedding anniversary this June. They have 12 grandchildren, and 14 great grandchildren. Charles (or Charlie as he was affectionately known), lived life to the fullest. He loved talking to people and never met a stranger. In his early life he built houses in South Daytona, FL. Later, he became a Certified Property Appraiser, appraising residential and commercial buildings all over the state of Florida. He moved his family to Highlands County in 1976. He worked for both Highlands and Okeechobee Counties for many years. He even continued working as an appraisal consultant into his 80s. He was the ultimate do it yourselfer and built his own home and surrounding gardens. He and his faithful wife Shirley, traveled extensively and loved going to new places. He had many interests and even took several art classes at South Florida State College in his retirement. His adventurous spirit had him try white water rafting and rope courses even into his 70s and 80s. He was of the Baptist faith and placed his faith in the Lord Jesus Christ. A Celebration of Life service will be held Saturday, April 9, 2022, at the Lakeview Memorial Gardens in Avon Park at 854 Memorial Drive, Avon Park, FL 33825. There will be viewing from 12:00 pm to 1:00 pm followed by a graveside service with Military Honors at 1:00 pm.

The family of Charles Seward Lambright created this Life Tributes page to make it easy to share your memories.

Send flowers to the Lambright family.