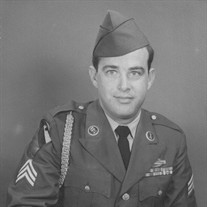 Charles Ingle, 76, of The Villages, FL passed away on August 13, 2021. Charles was born on December 24, 1944 to Mary Suzanna and William Oran Ingle in Tampa and grew up in Leesburg, FL. He was a loving and supportive husband, father, and grandfather who would do anything for family and friends. Charles graduated from Leesburg High School in 1964 and was drafted into the Army in 1966 for the Vietnam War. He served until wounded in combat on February 14, 1967 near Bong Son where he nearly lost his life and leg. Charles received 2 Purple Hearts, an Air Medal, and an Army Commendation medal for bravery under fire. He met his wife Nancy at Walter Reed Army Medical Center after being transferred there for care in 1967. He was honorably discharged as a Sargent in 1971. Charles was reunited with his military brothers of the 1st Air Cavalry, Company A, 2nd of the 12th platoon starting in 2013 and annually thereafter in the Villages, FL. He is survived by Nancy, his wife of 52 years; his children, Erik (wife Laura) and Jennifer (husband Jay); his sister, Helen (husband Don); 3 grandchildren, Sophia, Danielle, and Justin; and nephews, Ray and Richard. He was preceded in death by his father, William; his mother, Sue; and siblings, Paula and Michael. Charles was a master auto mechanic for 45 years in Maryland. He loved fishing and was an avid sports fan of the Washington Capitals among others. He pursued golf with a passion after moving to The Villages much to the surprise of his family and friends. He also enjoyed grilling and barbequing for any and every occasion. He was a lifetime member of the Disabled American Veterans and the Veterans of Foreign Wars, including many years of service for the DAV chapter in Bowie, MD. Graveside services will be held on Monday, August 30th at 10:30am at Florida National Cemetery in Bushnell, Florida. In Lieu of flowers donation may be sent to "Operation Home Front" in his name, at www.operationhomefront.org. Online Condolences may be shared by visiting www.bankspagetheus.com. Arrangements are entrusted to Banks/Page-Theus Funerals and Cremations, Wildwood, Florida

Charles Ingle, 76, of The Villages, FL passed away on August 13, 2021. Charles was born on December 24, 1944 to Mary Suzanna and William Oran Ingle in Tampa and grew up in Leesburg, FL. He was a loving and supportive husband, father, and grandfather... View Obituary & Service Information

The family of Charles Ingle created this Life Tributes page to make it easy to share your memories.

Charles Ingle, 76, of The Villages, FL passed away on August...

Send flowers to the Ingle family.