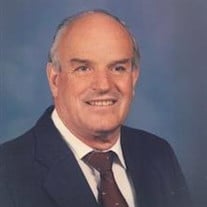 Carlton Gregory Force, Ph.D., 93, of Apopka, FL passed away on Saturday, September 21, 2019. He was born August 5, 1926, in Gouverneur, NY to Leon Henry and Christina (Hampton) Force. The funeral service will be held at French Funeral Home in Gouverneur 3:00pm, Friday, September 27, 2019, with Pastor Richard Mayforth officiating. Visiting hours will be Friday, 2:00 – 3:00pm. A burial will follow at the nearby Riverside Cemetery. Carlton served his country in the U.S. Army at the end of WWII helping our troops return home. He then earned his BS in Chemistry from Clarkson College of Technology (Clarkson University) in Potsdam, NY. In 1950 he met his future wife, Rosalie Gotham, while roller-skating at Sylvia Lake. They dated the next three years and were married on June 20, 1953, at the Methodist Church in Edwards, NY. Carlton had a lifelong passion for learning, in addition to his Bachelor's degree, he went on to receive a Master’s degree in Chemistry from the University of Illinois in 1958, his Ph.D. from Clarkson in 1963 and a Master’s in Business Administration from The Citadel in 1982. Carlton had a distinguished career as a research chemist and received numerous patents as a result of his work. He began his career at Merck Pharmaceutical in Rahway, NJ. After earning his Master’s degree, he worked as a chemist for Esso in Elizabeth, NJ until 1960 when he accepted a job with Latex Fibers Industries in Beaver Falls, NY. With the encouragement of his professor and mentor, Dr. Egon Matijevic, he returned to Clarkson and earned his Ph.D. and continued his work at Latex Fibers in Beaver Falls. Carlton had an opportunity in 1966 at Westvaco Pulp and Paper (WestRock) in Charleston, SC and moved his family to Mt. Pleasant, SC for the remainder of his career. Following 26 years of service working with his boss and mentor Dr. Frank Ball, Carlton retired in 1992. Carlton truly loved his career, but not more than his family and his roots. He kept the family summer cottage at Sylvia Lake in Gouverneur, NY and made sure his children were there every summer to grow up as he had—swimming and skiing in the crystal clear waters, leaping from cliffs into the lake, discovering the woods and how to become completely relaxed and calm. He cherished his time with his family at the lake and has instilled that passion in the hearts of three generations. He supported his children with his time and got involved in their activities, from helping with scouting and paper routes to assisting with school projects and passing along his skills as an expert ice skater and snow skier. Throughout his life, Carlton was very active in the Presbyterian Church, from singing in the choir since his childhood in Gouverneur to serving as a Deacon and volunteering on numerous committees as a member of the Mt. Pleasant Presbyterian Church. Carlton and Rosalie moved to Apopka, FL in 2013 from Isle of Palms, SC. Carlton is survived by his loving wife of 66 years, Rosalie Gotham Force, his four sons: Gregory (Rhonda) of Lexington, SC, Jeffrey (Elizabeth) of The Villages, FL, Stuart (Elaine) of Yalaha, FL and Ralph (Deborah) of Apopka, FL; six grandchildren: David Force; Jace (Trinh) Force; Jon (Courtney) Force; Melissa (Stefano) De Angelis; Kyle Force and Sean Force; plus, five great-grandchildren: Finn, Hunter, Riley, Brittney and Isabella. In lieu of flowers, memorial contributions may be made to the Mt. Pleasant Presbyterian Church Hope House, 302 Hibben Street, Mt. Pleasant, SC 29464. The Hope House provides a Christ-centered, safe, secure, temporary home-away-from-home for family members who have a loved one being treated at an area hospital. On-line condolences may be shared by visiting www.bankspagetheus.com. Arrangements are entrusted to Banks/Page-Theus Funerals and Cremations, Wildwood, FL and French Funeral Home, Gouverneur, NY.

Carlton Gregory Force, Ph.D., 93, of Apopka, FL passed away on Saturday, September 21, 2019. He was born August 5, 1926, in Gouverneur, NY to Leon Henry and Christina (Hampton) Force. The funeral service will be held at French Funeral Home... View Obituary & Service Information

The family of Carlton Gregory Force created this Life Tributes page to make it easy to share your memories.

Send flowers to the Force family.