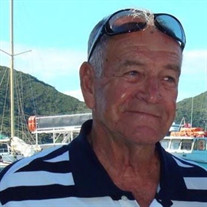 Avery Gordon Rutherford , 90, a native of Oxford FL,passed away peacefully on his birthday, September 8, 2020,in Chesapeake, VA, surrounded by family. Avery was born on September 8,1930; he was the youngest son of the late Edmon Curry Rutherford of Sumter County and Myrtle Eugenia (Crenshaw) Wyatt of Oxford. Avery attended Wildwood High School (class of 1949), where he enjoyed playing on the basketball and football teams. He served in the US Navy during the Korean War, from 1951 until 1954, aboard the USS Gurke (DD-783). After leaving the Navy, he began a career as an electrician with the Seaboard Airline Railroad and later worked as a telecommunications contractor for Burnup and Sims and JWJ, Inc. until his retirement in 2010. He was active in Masonic service for over twenty-five years. Avery was a Master Mason in Friendship Lodge No. 53 F. & A.M., a Master of the Royal Secret in the Valley of Ocala Orient of Florida A.A.S.R.S.J.U.S.A., a Noble in Morocco Shrine Temple, Jacksonville, Florida and a member of the Ocala Shrine Club, Ocala, Florida. Avery was also a member of Pleasant Grove Baptist Church of Oxford. He had a gentle manner and a quick wit; he loved fishing, hunting, golfing and was a life-long Florida Gators fan. He was preceded in death by his brother, Ernest Charles Rutherford. Avery will be missed by his four children: Edmon “Eddie” Curry Rutherford II, Thomas Bryan Rutherford, Elizabeth “Kassie” Russell, and Ernestine “Abby” Hewitt and eight grandchildren: Rachel Rutherford, Jennifer Rutherford, Thomas “Danny” Rutherford, Ryan Smith, Taylor Smith, Grace Hewitt, Samantha Smith and Charlotte Hewitt. A Masonic memorial service will be performed graveside on Saturday, September 12, 11:00 am, at Nichols Cemetery, County Road 246, Oxford, FL. Casual, comfortable attire is requested by the family as per Avery’s wishes. In place of flowers, the family requests donations be made, in honor of Avery, to: Shriners Hospitals for children. Checks can be made payable to Shriners Hospitals for Children and mailed to: Ocala Shrine Club. PO Box 830035. Ocala, FL 34483

Avery Gordon Rutherford , 90, a native of Oxford FL,passed away peacefully on his birthday, September 8, 2020,in Chesapeake, VA, surrounded by family. Avery was born on September 8,1930; he was the youngest son of the late Edmon Curry Rutherford... View Obituary & Service Information

The family of Avery Gordon Rutherford created this Life Tributes page to make it easy to share your memories.

Avery Gordon Rutherford , 90, a native of Oxford FL,passed away...

Send flowers to the Rutherford family.