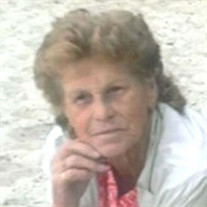 April Louise Street, age 72 of Wildwood passed away on April 28, 2019 peacefully at her home surrounded by her family. April was born on April 14, 1947 in San Mateo, California to John Henry and Frances Louise (Stacey) Freel. April married Dallas Sumner in 1963 in California, they moved to Florida in 1964, he passed away in 1973. April married Steve F. Street in 1974 in Georgia, and he passed away in 2004. April was the custodian at Wildwood Elementary for 25 years. She was respected by many in the community as she watched them grow up. April was a past member of the Eastern Star, loved to thrift store shop, as an avid gardener and loved her flower beds. She enjoyed fishing, but most of all she loved her family. She enjoyed the time she spent with her children and especially her grandchildren. April is survived by her son Andy (Ann Marie) Sumner of Orlando, son Sam (Candy) Street of Wildwood, daughter MaryAnn (Darrel) Rankin of Wildwood, step-son Steve (Stephanie) Street of Alabama, step-daughter Carla Street of Georgia, brother Charles Freel of California, sister Mary Sullivan of California, sister Ann Freel of California, sister Caroline Freel of Texas, grandchildren, John Sumner, Jesse Sumner, Megan Sumner, Justin Stafford, Nathan Stafford, Samantha Street, Cloey Street, Izabell Street, Franklin Sumner, Amber Boram, Megan Street, and great-grand children Norah, Ava, Adley, Dallas, Stetson, Layla, Marley, Rylie, and Zoey. April is preceded in death by her parents, both husbands, brothers Michael, Jesse, and John Freel and sister Victoria Freel. Visitation will be held on Thursday, May 2nd 2019 at Banks/Page-Theus Funeral Home from 6-8 pm with the Funeral Service to be held on Friday, May 3rd at 10:00 Am at the Banks/Page -Theus Funeral Home. Burial to follow at Oak Grove Cemetery in Wildwood.

The family of April Louise Street created this Life Tributes page to make it easy to share your memories.

April Louise Street, age 72 of Wildwood passed away on April...

Send flowers to the Street family.