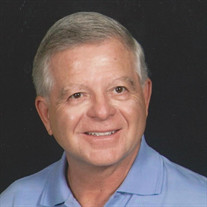 Anthony Joseph Aquilino, 86, of The Villages, passed away Thursday, March 19, 2020. Mr. Aquilino was born February 25, 1934 in Philadelphia, PA to Charles and Irma (Terra) Aquilino. He was a U.S. Navy Veteran. His Navy experience in the 50’s and 60’s taught him electronics as he kept batteries running in the oil tankers on the Mediterranean Sea. Anthony was the owner of Green Light TV where he sold and serviced televisions. He also owned a wedding shop, a delicatessen and several rentals. His family worked with him in all of his ventures. It’s been told over the years that Anthony was the first man to put a TV in a bar. The bartender told him, “If you put a TV in my bar they will drink more!” You know what happened after that. He retired at 55 and moved to Englewood, FL and soon met Beverly Johannas, his loving companion of 17 years, at a dance. Anthony loved to play tennis. He played for 30 years and taught many people to play. He also enjoyed playing shuffleboard and bocce. Anthony was a music lover and played the saxophone in a band when he was young. He loved hearing Bev sing. Low vision, Parkinson’s and Lymphoma tried to slow him down, but he did his best at all times to combat these illnesses. After selling their homes, he and Bev moved to The Villages together in 2012. Although he was raised Catholic, he became a member of the Community United Methodist Church in Fruitland Park after moving here. Along with Bev, he is survived by his son, Anthony Aquilino of NJ; brother, James Aquilino of NJ and grandchildren, Jocelyn Aquilino and Addison Aquilino. Anthony was preceded in death by his parents, a son, James Aquilino and siblings, Carl Aquilino, Rose Doyle and Jenny Diaquinto. Anthony will be buried near his parents and next to his son, Jimmy, in the St. Peter & St. Paul Cemetery in Springfield, PA. He was loved by many and will be missed by all. On-line condolences may be shared by visiting www.bankspagetheus.com. Arrangements are entrusted to Banks/Page-Theus Funerals and Cremations, Wildwood.

The family of Anthony Joseph Aquilino created this Life Tributes page to make it easy to share your memories.

Anthony Joseph Aquilino, 86, of The Villages, passed away Thursday,...

Send flowers to the Aquilino family.