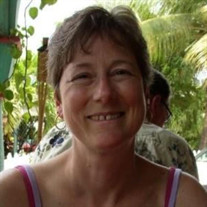 Amy Slaney (nee Liebmann) January 20, 1957 – February 19, 2021 Amy was born in Appleton Wisconsin. She was one of eleven children of Don and Muriel Liebmann. Amy described herself as “number 7” and could recite the names of her siblings in the order in which they were born. Amy was always smiling. She was a joy when she was with friends and a loving wife to Bob (Robert) Slaney. Amy and Bob were happily married for 24 years. After meeting in Rochester Minnesota in 1995, Bob moved to Atlanta at the end of 1995 and Amy joined him in November of 1996. She and Bob married on January 11, 1997. They lived in Powder Springs, Georgia. Amy worked as a copy editor in the newspaper industry and also as a graphics artist and catalog composer for a large automotive parts company. She retired in 2014. In late 2013, Bob moved to Apollo Beach, Florida, where he moved into what was supposed to be their retirement home. Amy continued to work in the Atlanta area until she retired in April of 2014 and then joined Bob in Florida. Amy did not miss what she called the cold Atlanta winters. After living in Apollo Beach for 5 years, Amy and Bob moved to The Villages in 2018. Amy loved to knit and later in life took up painting on framed canvases. She loved to walk and enjoyed taking her toy poodle, Diesel, along with her. In 2013, she was diagnosed with Parkinson’s disease which later was diagnosed as Multiple Systems Atrophy. Even though she suffered from the symptoms of this rare disease, she never complained and was always filled with cheer. She never forgot anyone’s name and she spread joy when she greeted people and friends. The disease became crippling over time and she spent the final 18 months of her life in a nursing home in the Villages, Florida. Amy is survived by her loving husband, Bob, and her ten siblings, Larry, David, Eric, Patrick, Karl, Joe, Laura (Isom), Margie (Schwartzbauer), Sara (McMahon), and Nancy (Royster). Online condolences may be shared by visiting www.bankspagetheus.com Arrangements are entrusted to Banks/Page-Theus Funerals and Cremations, Wildwood, FL

The family of Amy Louise Slaney created this Life Tributes page to make it easy to share your memories.

Send flowers to the Slaney family.